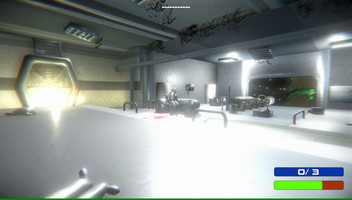 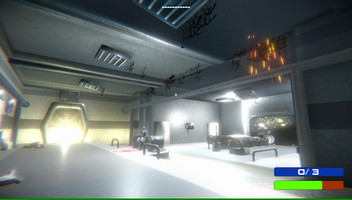 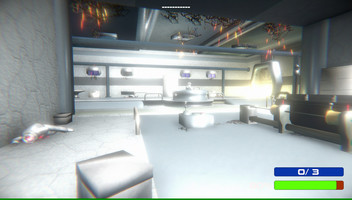 Might tweak the light, as it seems a bit too bright in the build.

New enemy ships (not in the free demo version).

New debris added (not in the free demo version).

The extended story - in case you're wondering:

‘It all began when our cargo ship plus the escort ships were attacked without warning. Our ship was disabled, left to drift in space while the enemy destroyed our ships, like they were nothing. The battle went on for days, and I was given a chance to fight back. But with what, and how? Luckily there was access to the cargo bay for a while, until that hall collapsed. Then I was trapped in one of the smaller loading bays.

I examined the enemy ships, and they seem to have shields which can deflect any of our weapons. The shields have specific color frequencies which should be able to be disabled. A laser beam directed through thin slices of gemstones that I found in the cargo bay might do the trick.

To easily load the color, I've used some old style boat Speedometers.
Along with an old car gear shifter to pinpoint the enemy weak spots, by slightly changing the angle of the beam, in micrometers.
The high powered beam, originally used for mining will be sent through two large lenses which were going to be used in telescopes.
The fire button is red button, and once activated it bounces the beams to the extent where it can push through the lense and then into space, right into the enemy ship.

The push buttons are from an old arcade machine. I managed to rewire the ships remaining shields to one of the buttons, and the other button is linked to a camera, which scans and then filters out color tones in the right order.

There are also valves which can manage to circulate the few thousand volts which are attached up to this thing without overheating.
But in the event of a possible overheat, I attached a train whistle as a heat sink.

The enemy might re-appear any time. The weapon I have constructed is untested.
I hope more battle ships arrive soon or I will starve.
There's no way I am going to eat my fallen crew members, they're starting to smell bad anyway.
I fear for my life.'

Get Mastermind In Space